It’s storytelling that evokes feelings and emotions that makes readers care about science. That’s what we heard from Ed Yong, a science journalist for The Atlantic, who talked about “Why Storytelling Matters in Science” to a large crowd of scientists and science writers. Hosted by Dr. Kristian Andersen at the Scripps Research Auditorium on February 21, 2019, the talk was part of the first annual Center for Viral Systems Biology workshop. Here’s a summary of what Yong covered.

Know Your Audience and Get Them to Care

When writing about science for the general public, Yong reminds us this is anyone who doesn’t work on your very niche area of science. This includes other people in your same department, going to the same meetings. When he thinks of the audience he’s writing for at The Atlantic, he pictures a bunch of people on the London Underground. They are bored and distractible, and while they last encountered biology in high school, they are very intelligent, and can get science stories when explained well. However, they can stop reading at any given time. So, how do you get them to care when don’t know anything about it, or worse, they are scared of topics like microbiology and infectious disease? Yong says, “People don’t care if they don’t have an emotional tether to connect them to a world they are unfamiliar with.” Yong says that telling the stories that underpin scientific discoveries is a crucial part of science writing. It’s a powerful way of getting people to care about things they don’t otherwise care about.

Writing successfully about science is much more than translating papers. Yong makes a tactile analogy to making brownies. What makes you feel more connected to a recipe? Is it just looking at the ingredient list and steps? Or is it the photo of the outcome, i.e., the luscious, gooey brownie? Yong gave several examples of science articles he’s written where he integrated stories to make the reader care.

Be on a Quest to Understand More

Yong opened his talk with an article he wrote about a real-time evolutionary biology study on how mice match their coat color to their environment, “The Wild Experiment That Showed Evolution in Real Time.” What turned the article into a story was Yong’s probing to understand the background, i.e., how the study came about and what it took to execute. He learned that it was in a bar where the scientist, Rowan Barrett, finally met a rural land owner willing to set land aside for his study. What drives Yong to tell stories about science is his quest to understand more about something that’s new, weird, and baffling and uncover the human stories behind the research. In his article on acute flaccid myelitis (AFM), “The Main Suspect Behind an Ominous Spike in a Polio-like Illness,” Yong’s quest to find out why we don’t know what causes the disease is what turned it into a story. When he wrote a story about a disease killing starfish, “A Starfish-Killing Disease Is Remaking the Oceans,” it was a quest to understand something new and troubling.

Tell Stories of the People Who do the Research

Yong said that getting the stories of the people who do the research gives a better picture of what science is. The lives and stories of the people who do the research are not often told. In his story, “The Decades-Long Quest to Make Virus-Proof Mosquitoes,” Yong not only talks about the scientific efforts to block Aedes aegypt (the mosquito that spreads Zika and Dengue) by infusing it with the Wolbachia bacterium, but he also captures the story of the ups and downs of the people doing this work for decades. In writing on the death and decline of coral reefs for, “How Coral Researchers Are Coping With the Death of Reefs,” Yong focused his story on how coral reef researchers are facing the loss of everything they’ve studied their whole lives and what does it do to their mental health. Knowing true personal stories in science help us understand how they are able to take part in science. In “One Harvard Lab, Six Iranian Scientists, and Some Tea,” Yong wrote about Pardis Sabeti, an Iranian-born geneticist with five Iranian-born scientists in her lab just after Trump’s travel ban was enacted. Her entire research enterprise does not exist without the ability to move freely across borders and welcome people with different backgrounds. That personal story affects their ability to do research, which includes understanding the evolution of Ebola during outbreaks.

Yong told us about a 9,000-word feature he wrote, “The Next Plague Is Coming. Is America Ready?” to explore how prepared we are for the next pandemic, especially in communities that experienced a serious outbreak. He even traveled to the Democratic Republic of Congo (DRC), which had an Ebola outbreak in 1995. He wanted this piece to not only cover genomics and vaccines, but also reach into politics and psychology. In mapping out the story, he originally planned to start in the Congo and end in the Congo with sections in the middle covering like lack of money, vaccines, screening, and genomics. He says that plan didn’t work. Instead, he mapped it into eight sections that move through an information-gathering journey in which the reader experiences highs and lows and feelings and emotions. 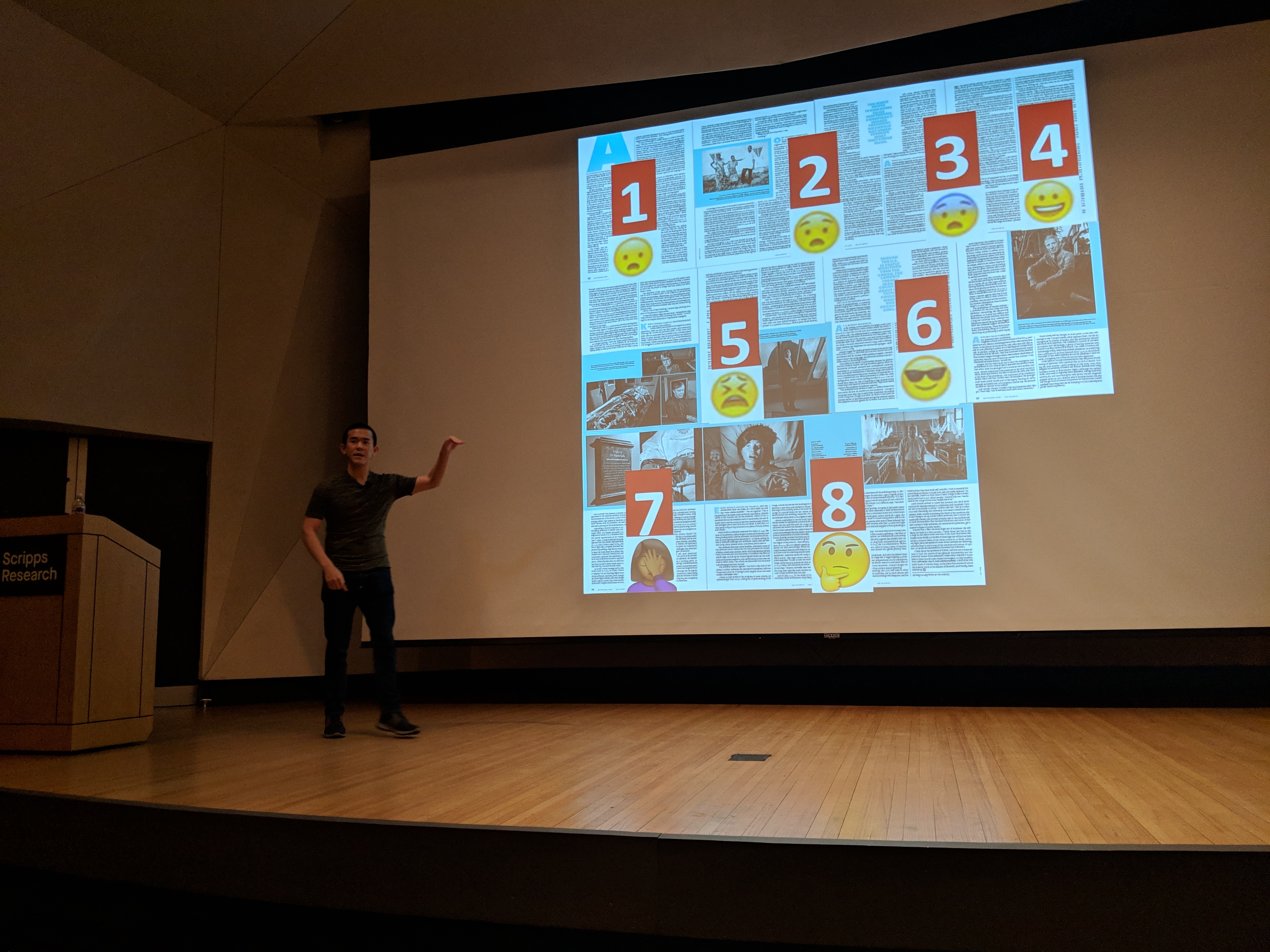 Since most people find areas like microbiology and infectious diseases unpalatable or scary, Yong wrote a book to get past that called “I Contain Multitudes: The Microbes Within Us and a Grander View of Life.” Here he tells stories about microbes to make it approachable for the general public so they can be both informed and entertained at the same time. Some of the one-star ratings for the book on Amazon comment that the book is “dumbed-down” and that it needs more charts, lists, tables, diagrams, details, complexity, and seriousness. Elements Yong says are what scientists see as synonymous with science. Yong conveyed that conventional science writing omits feelings and emotions because they get in the way of the supposedly neutral, objective, empirical methods and results sections that fill papers. 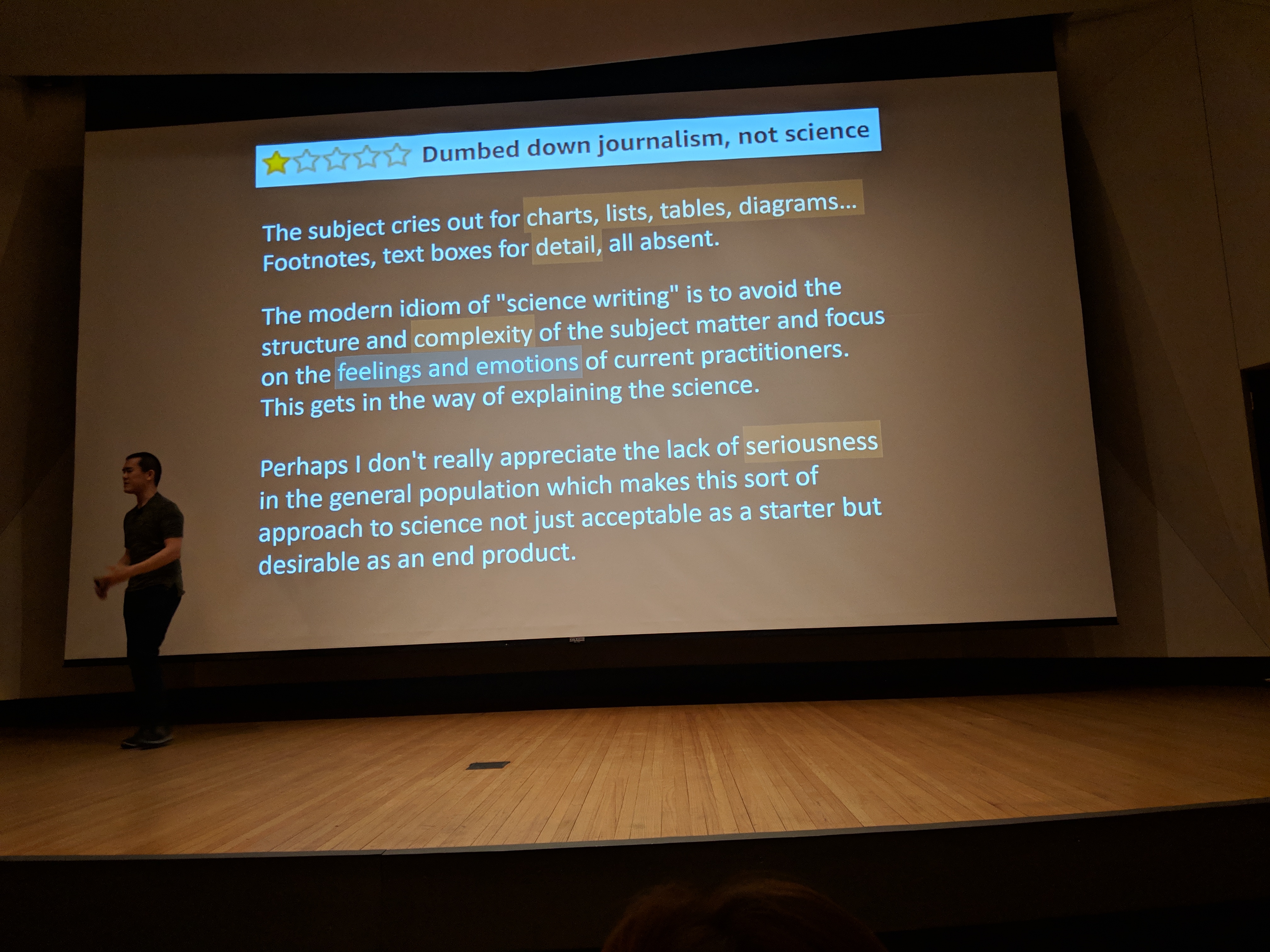 He added that there is a common idea among science writing that you can fix disinterest, lack of knowledge, or inaccurate views, by just giving people the facts. This treats people as empty vessels that you pour in facts and knowledge, and some day they become wiser and change they minds. Yong emphasized that you cannot displace a feeling with a fact. You can only replace a feeling with a different feeling. Like joy or curiosity. 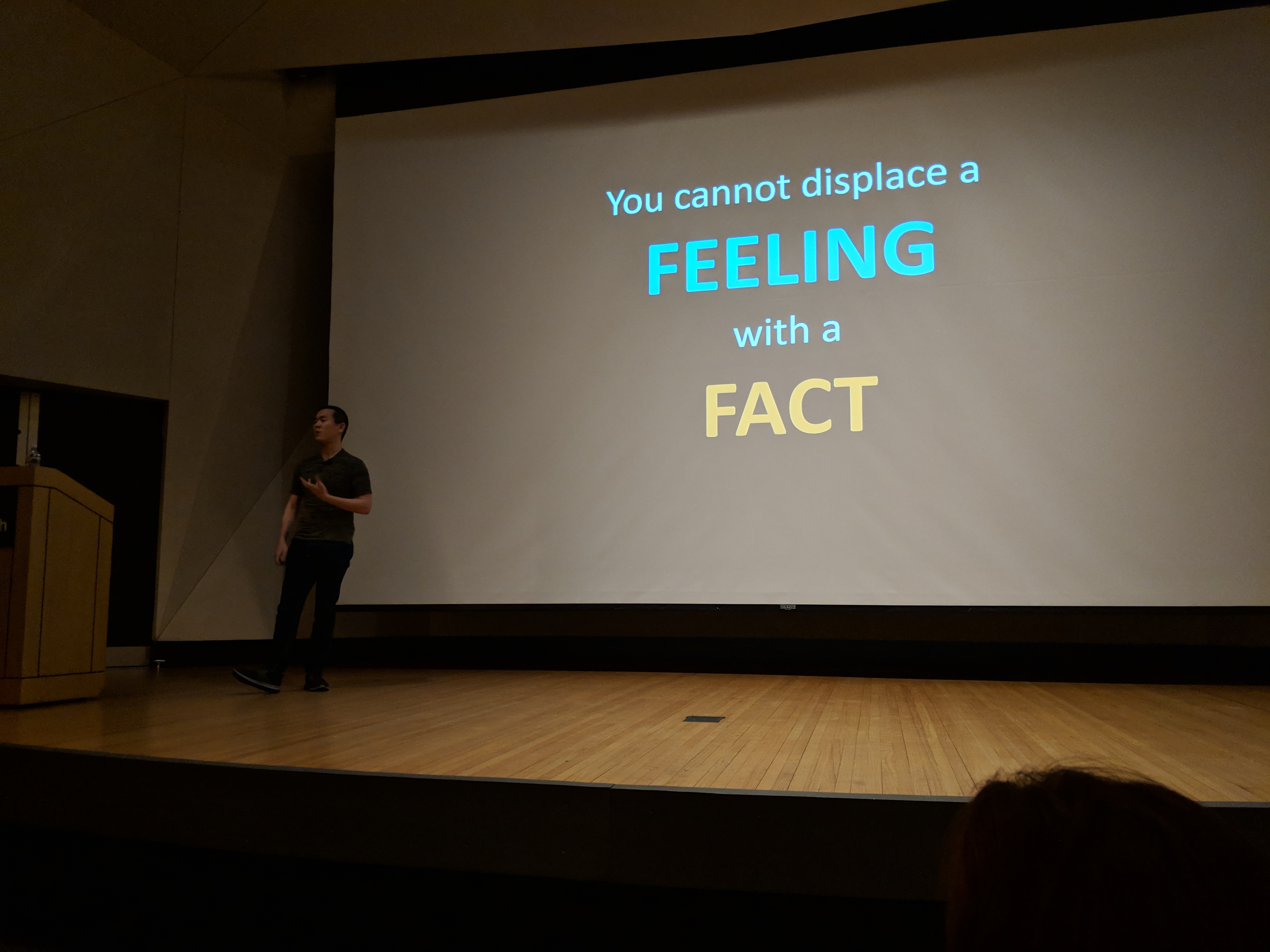 Yong recognized the value of scientific papers and showed us his list of the hundreds he cited for his book. He noted, however, that if he’s getting this criticism—the idea that science should be cold, dispassionate, devoid of feelings and emotions—then scientists are getting it all the time. His partner at Story Collider confirms this notion. They get scientists to tell personal stories about science and offer training sessions to help them embrace the art of storytelling and narrative. But they get push back from scientists who say “they don’t have any feelings” about what they’ve been studying for 20 years.

To demonstrate that scientists do have feelings and emotions, he shared a story about when trained marine biologists witnessed strange behavior from an eel watching the Nautilus live stream from the deep oceans. They erupted with excitement, enthusiasm, silliness, and curiosity. That’s feelings and emotions.

It’s Not About Tricking the Audience into Reading Science

In “How a Guy From a Montana Trailer Park Overturned 150 Years of Biology,” Yong wrote about the discovery that lichens are really a three-part organism instead of what we believed to be just two parts, fungi and algae. “Who cares?” Yong thought you might be asking. When he started asking questions like, “What is the origin of this work?” he learned the scientist, Toby Spribille, grew up in a fundamentalist cult trailer park where he was not allowed to be interested in science. But he liked being in nature and eventually raised enough money to leave, get a PhD, and come back to the US to study lichens. Yong integrates Spribille’s background into the story because the field of symbiosis has been pushed forward by outsiders against the mainstream and lichens must be pretty cool for Spribille to go through all his efforts just to study them. What Yong made clear is that “this is not science by stealth.” He is not trying to secretly introduce science by dressing it up with interesting stories. The life and the work of the scientist are inextricable. It is part of the act of science writing.

Ensure Your Writing Represents the Diversity in Science

In this article “The Women Who Contributed to Science but Were Buried in Footnotes,” Yong writes about a study where five undergraduates combed through every paper in one journal in population genetics programming from 1917 to 1990. They wanted to quantify the gender of the people credited in the acknowledgments that today would be rewarded with authorship. Women represented 59% of the acknowledgements and only 7% of the authors. Ed noted that if you look at papers in this field in the 1970s you could be forgiven for thinking that population genetics was the work of mostly white men. Another group looked at the ratio of men and women in the author list of papers published in many fields over many decades and calculated how long it would take for the numbers to equalize. They predicted 16 years; and 258 years specifically in physics. This combined with harassment, pay inequality, and giving fewer talks contribute to pushing so many women out of science.

When Yong did the same investigation of his own work, he found the same ratio, i.e., only 25% of his sources were women. He says this roughly matches what other people have found in these exercises. Finding this unacceptable, he spent a few months trying to rectify that balance, and reports it’s been 50:50 ever since. He’s also giving visibility to people of color, and people in LGBTQ and immigrant communities. Yong says this matters to him in science, because the choices that he and his colleagues make affect who is seen as being a part of science, and therefore who gets to be a part of science, and further, the type of science that gets done. To which he received great applause from the audience.

He shared a story he wrote on Ben Barres, “The Transgender Scientist Who Changed How We See the Brain.” Yong said Barres is an instructive case because he was largely responsible for showing that glia cells, which were long thought to have only a supporting architectural role, actually make up half of the brain, and are far most central to the workings of the brain. Yong believes it is no coincidence that someone who thought deeply on the issue of diversity and was part of a marginalized community, was also the one who showed that at group of cells that make up half the brain that have long been neglected and overlooked, are super important.

In closing, Yong remarked that the people who we are affect the science that we do. If affects the hypothesis that we come up with. The questions we want to pursue. The ways we look at and analyze data. Appreciating the stories and backgrounds of the people who get to be scientists affects the kind of science we get out. That is why stories matter.